It was July 1981 when the Liverpool 8 Uprising – or ‘Toxteth Riots’ as it became known – began. Following the typically aggressive and heavy-handed arrest of Leroy Cooper on Friday 3 July, anger erupted on the streets of one of Liverpool’s most deprived areas in one of the most voracious displays of collective rage seen in the 1980s. Such was the force of the insurrection that the Conservative Government at the time was forced to seriously rethink both their policing and urban planning strategies. But what were the wider undercurrents that lead to these nine nights of rebellion? And to what extent have the ‘new’ policing and urban planning strategies come to mirror their predecessors?

Working class and ethnic minority communities in the 1980s were suffering heavily under Thatcher’s restructuring of society. Deliberately dismantling British industry in order to make way for the neoliberal economic model, the government of the time caused mass unemployment and widespread poverty. This was felt most in the inner cities, where certain communities were designated ‘criminal’ by default by local policing strategies. These communities were all-too-often ethnic minorities and it was the forces of institutional racism that ruled the streets. Police harassment was endemic. If you lived in these areas it was near impossible to get work – there were no jobs within these communities and employers from outside these communities wouldn’t give you a second glance.

Most controversial was the widespread implementation of the ‘sus’ laws (find out more HERE). These laws meant routine stop-and-search, arrest and intimidation for people of Liverpool 8 and every other inner-city working class community throughout the UK. Free from any scrutiny whatsoever, the police acted with impunity on a remit that amounted to intensive harassment and containment of whole communities. The Liverpool 8 uprising and all those like it accross the UK, were the most articulate expressions of dissent against the socio-economic pressure cooker people found themselves in. Essentially, the big urban riots of the 1980s did more to shift the discourse on the role of the police and the language with which policing is framed than anything else since.

Subsequently, the ‘sus’ laws were repealed on 27 August 1981. Community policing emerged alongside traditional policing models in order to better manage the image and perception of the police by communities on a local level. Think of it as “good cop, bad cop” enshrined in strategy. This new model would employ more ethnic minorities, engage in community consultation processes and familiarise themselves with locals on a more informal and less hostile level. Or so they said.

Urban regeneration was introduced in order to restore the neglected urban landscapes of the inner cities. This infrastructural poverty was believed to be one of the main aggravating factors for the riots of ’81 by the establishment. It was also thought that over time, as the areas became more desireable places to live, that the class composition of such areas would become less singular. This attempt to dilute local demographics would make it fundamentally easier to police; solidarity is much less likely amongst people with differing social experiences and greater degrees of alienation from each other.

So, thirty years later, where have these strategies left us?

The Rise of Intelligence-led Policing and it’s Origins.

In the aftermath of the movement against the Criminal Justice and Public Order Act 1994, an enquiry was launched into how public order situations could be better managed by the Metropolitan Police. This led to an embryonic version of the FIT being established on a remit not dissimilar to that of the emergent community policing approaches of the 1980s. That is, to have a third party police unit engage with protest groups on an approachable level and to attempt to mediate between the police and protestors. To be the friendly face, the point of contact, the “good cop”.

Regular readers of this blog will be familiar with how, in reality, that ended up: a specialist unit of police officers who indiscriminately target protestors (amongst others) for surveillance, harassment and intimidation as a tool to crush dissent.

It was in 2008 that (then) Home Secretary Jacqui Smith announced that the Police would be rolling out these tactics to the estates to combat “anti-social behaviour”. Anti-social behaviour was Labour’s crime buzzword of the noughties – a term so nebulous it became used much in the same way as the ‘sus’ laws of the 1980s. Anti-Social Behaviour Orders (or ASBOs) were used to impose stringent conditions on the behaviour of individuals who were regarded, for whatever reason, undesireable. Breaking these conditions is a criminal offence and thus often criminalises essentially un-criminal behaviour. This particular FITwatcher remembers the tabloid shockers of the time: the suicidally depressed getting ASBOs preventing them from going near tall buildings, the woman who enjoyed sex too much and was told to keep it down or risk getting a record. Then there were the local police advertising campaigns: billboards and buses bearing the likenesses of supposed ‘offenders’ detailing their ASBO conditions and urging people to grass if the ‘offender’ is seen to break their conditions. In the midst of ASBO-mania, Jacqui Smith heralded the arrival of “Operation Leopard” – a pioneering scheme to introduce Forward Intelligence Team tactics to Essex. Coupled with the 2007 introduction of additional powers for Police to stop people on the street based entirely on suspicion (again, not a million miles away from the ‘sus’ laws), it wasn’t long before it was rolled out to police other areas – such as the estates around East London’s Brick Lane.

Brick Lane (and the London Boroughs of Tower Hamlets and Hackney as a whole) offer a prime example of how urban ‘regeneration’ is used to justify extensive gentrification of the inner cities. Rather than investing in maintenance and repair of, for instance, social housing whole estates are left to go to rack and ruin. This, in turn,  is used to justify their demolition and the relocation of their tenants to estates in the suburbs of London (and beyond) to make way for those who will invest in the private housing market. Essentially, this further decimates working class communities and creates new ghettos away from the inner cities even more socially excluded, infrastructurally deprived and more vulnerable to abusive policing. Whoever has the dubious good fortune to remain in the inner city faces extreme social exclusion as municipal planning schemes revolve entirely on transient communities of young professionals and students. Conversely, local policing strategies treat the established communities of such areas as criminal. For example, the surveillance operation on Brick Lane focuses entirely on the harassment and intimidation of local Asian youth, whereas the predominantly white, middle-class party goers of the area’s booming nightlife scene go uninterrupted. Another glaring example of such discrimination exists in the policing of the London Fields area of Hackney. Police initiatives target young, predominantly black “gang culture” yet totally ignore the summertime use of the park as a trendy hangout for again, predominantly white middle-class young professionals. In the summer the park resembles a music festival with literally hundreds of people there partying, drink and drug use is commonplace. Note: this FITwatcher is not arguing for Police intervention in such use of the park, but rather pointing out that if it was used in such a way by the established Black community there would be stop-and-searches, anti-social behaviour orders and camera teams everywhere.

Where do we go from here?

We have seen how concentrated police harassment affects not only our own social movements, but also the communities of the past and the present. We also have an idea of the forces at work behind policing – how it is always used selectively by the government as a tool of social control whether in our communities or on protests. Some of us may know better than others how this feels; we have all experienced repressive policing in different ways. Some of us in our communities, some of us on protests, at football matches and so on. Some of us may never have directly experienced such harassment, but are rightly disgusted by it. It is important that we respect the differences in our experiences, whilst focussing on the one thing that we all share; a determination to assert ourselves and fight back against repressive policing. We may also choose to fight back differently – we must not make moralistic value judgements on the different ways people resist these repressive policing strategies. We must not allow ourselves to be divided by an insistence on non-violence or violence either way. A tactically diverse movement acting in solidarity with each other is one of the most resillient enemies of the status quo. 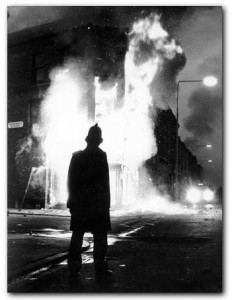 3 thoughts on “30 Years since the Liverpool 8 Uprising”